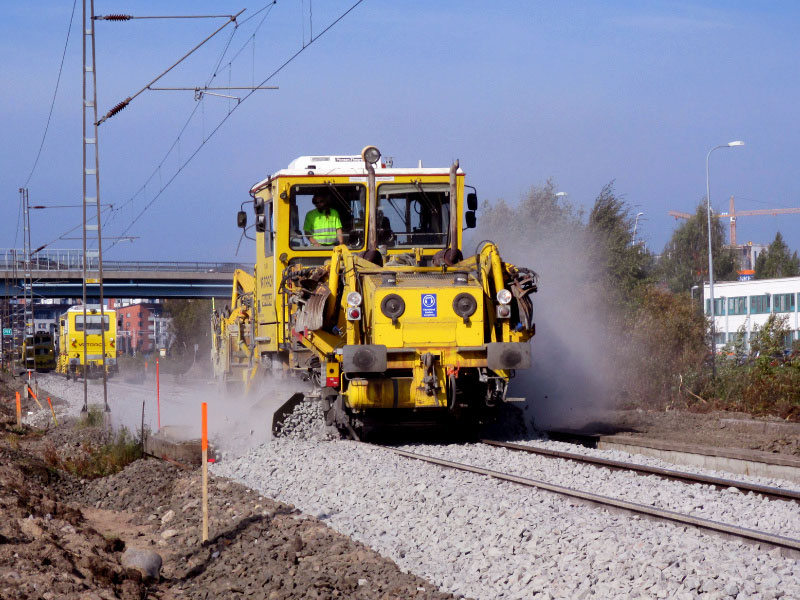 The operations of VR Track were streamlined and the performance of the company improved in 2014. A large number of important projects were under way during the year.

At the start of the year, the track machinery business operations were split off from rolling stock and material services and made into a separate business. The business development programme, which was launched in 2013, was continued with the aim of achieving long-term improvements in profitability and competitiveness. Occupational safety was also systematically promoted.

A large number of rail projects under way

The construction business had a large number of important projects under way during the year. Of these, the double-track sections Kokkola-Riippa and Ruha-Lapua and the renovation of the section between Liminka and Oulu are part of the renovation of the important Seinäjoki-Oulu line carried out by the Finnish Transport Agency. The superstructure contract for the important Ring Rail Line in the Helsinki region continued as planned. The new line will be opened to traffic in July 2015. Click here to read more about the Ring Rail Line.

The construction work on the Lielahti-Kokemäki alliance project, which was started in 2012, was completed in late 2014, as scheduled. The alliance project received the occupational safety award from the H. Roos Foundation for promoting occupational safety and the Antti prize awarded by the local newspapers for actively communicating about the project.

Electrification of the Rovaniemi-Kemijärvi line was completed in early 2014 and the first electrically hauled overnight express arrived in Kemijärvi on 11 March 2014. The length of the electrified section is 85 kilometres.

During the year, VR Track was responsible for eight of the 12 maintenance areas of the Finnish Transport Agency. The maintenance contract for Uusimaa (maintenance area 1) secured in 2013 is one of the one most important in Finland in terms of rail traffic. It has about 285 kilometres of lines (most of it multi-track), a large number of busy commuter lines, the tunnel section to the Vuosaari Harbour, the Ring Rail Line (to open in 2015), the Kerava-Lahti direct line and the two most critical points in the Finnish rail network: the Helsinki-Pasila section and the Ilmala rail yard.

There was a slight increase in the capacity utilisation rate of VR Track's own production facilities. VR Track also carried out active product development work in such areas as the manufacturing of points. The development of elastic points reached the pilot stage in autumn 2014 as two elastic points were installed in Kouvola with the aim of gathering experience of their use. The aim of the new solutions applied in elastic points is to reduce wear and life-cycle costs.

The obligation to provide the Finnish Tax Administration with notification of construction work entered into effect on 1 July 2014. The new arrangement is part of the efforts to combat the shadow economy. The introduction and practical application of the systems and instructions were carried out on schedule.