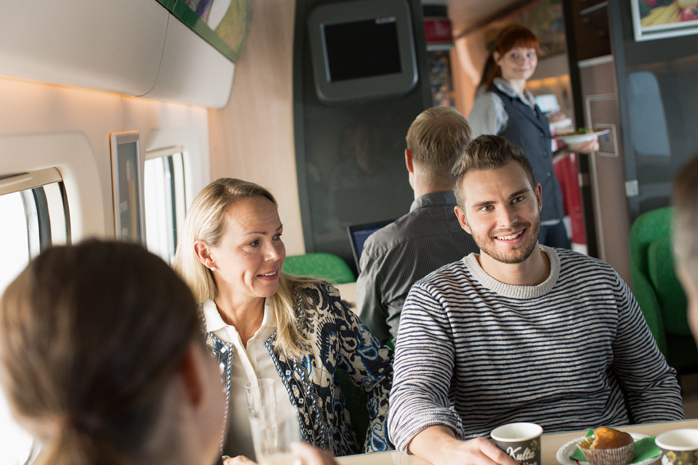 A wide range of passenger services

The aim of VR is to make train travel more popular and provide more pleasant travel experiences by improving punctuality, by introducing new pricing schemes and by offering better service.

Improving the customer experience is a key goal for VR. The most important reason given by customers for choosing the train is the comfort of rail travel.

Being able to work during the journey, use of the free internet connection on board, and the restaurant services are important factors contributing to the comfort of rail travel. Other important reasons mentioned are that VR’s timetables fit in with the passenger’s schedule, fast journey times, convenient location of the station, and the safety of rail as a form of transport. Rail is for many also an eco-friendly choice.

Service through many channels

The online shop is VR's biggest ticket sales outlet. Tickets can also be purchased in VR Mobile, at ticket offices at railway stations, in ticket machines, on trains and the telephone service of the VR Customer Care. Tickets can also be obtained at more than 600 R-kiosks and nearly 300 travel agencies around Finland.

When developing customer service channels, VR utilises the proposals received from members of the Veturi customer loyalty scheme. The next versions of the services will in particular focus on making the service easy for loyalty scheme customers to use, and on the specific interests of the customer.

The Veturi customer loyalty programme already had more than 700,000 members in 2014. Veturi has attracted customers evenly from all around Finland and from all age groups. In customer surveys, Veturi members are themselves of the opinion that belonging to Veturi makes rail travel more interesting. According to a comparison made by TNS Gallup, Veturi was Finland's most popular customer loyalty programme 2014

VR received a total of 11,157 refund claims under EU regulation on railways' responsibilities for 2014.

In handling claims and providing compensation, VR complies with the Railway Transport Act and the EUregulation on railways' responsibilities.

Feedback and contacts by customers are important for VR. They help us to identify and prioritise areas where improvements are needed. A large proportion of the feedback and compensation claims concerns the punctuality of train services. In order to improve punctuality, VR is cooperating closely with the Finnish Transport Agency and HSL (Helsinki Region Transport). Click here to read more about punctuality.

VR is also cooperating with the same parties to improve the provision of customer information during service disruptions.

VR made the purchasing of train tickets easier by starting cooperation with R-kiosks in 2014. As a result, Finland got 600 new train ticket outlets. VR is also developing its online shop, mobile services and telephone services.

Customer satisfaction with VR services has improved in recent years. In 2014, satisfied customers accounted for 90% of all passengers.