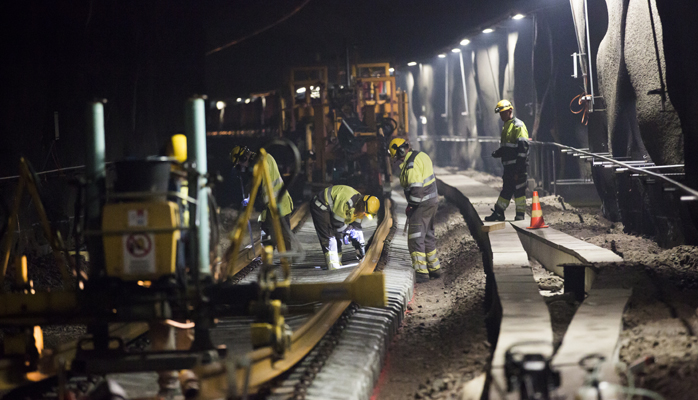 The Ring Rail Line is one of the most important transport projects in the Helsinki region this decade. VR Track has been involved in the construction of the Ring Rail Line by carrying out a superstructure project.

The Ring Rail Line, a joint project of the Finnish Transport Agency, City of Vantaa and Finavia Corporation, will connect the Vantaankoski rail line with the main line at Hiekkaharju in Vantaa. It will also provide a rail link between the main line and Helsinki Airport. The Ring Rail Line will have five new stations: Vehkala, Kivistö, Aviapolis, Airport and Leinelä. Eight kilometres of the new line are in tunnels.

Track laying in a tunnel in the Ring Rail Line

VR Track has been involved in the construction of the Ring Rail Line by carrying out a superstructure project. There were a total of seven work sections during the year. The construction season began in March with the first tunnel section in Ruskeasanta and the first points were installed in October in a tunnel near the Airport station. The work on the northern track was completed in November 2014 and the southern track in January 2015. The work will be handed over to the client in spring 2015 after the completion of the finishing work.

Working with machinery in tunnels poses challenges, particularly in ventilation. In the superstructure work performed in the tunnels of the Ring Rail Line, VR Track used a points tamping machine equipped with an exhaust gas purification device. The machine was also particularly well-suited for operating in the steep inclines of the tunnels.

In the track laying carried out as part of contract, VR Track used for the first time a machine specifically designed for the collection of rails. The machine met expectations and in the future it will be used for track laying together with conventional equipment.

Safety has been a major consideration during the contract. People working at the site have been provided with training and site briefings and supervisor staff have attended weekly safety briefings. The Regional State Administrative Agency has also conducted regular safety inspections at different sites on the Ring Rail Line.

According to the weekly safety measurements (MVR), occupational safety has been at very high level throughout the project. At VR Track sites, it has been at 90 per cent (average for 2014 was 96 per cent).